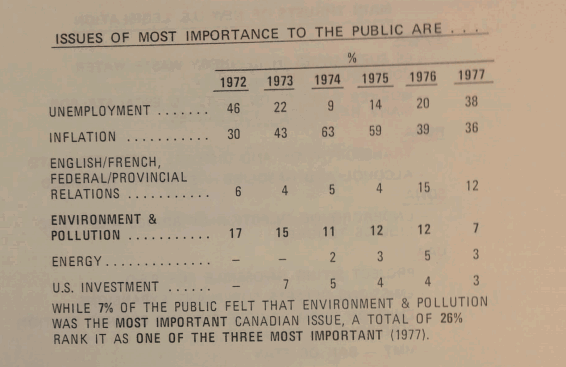 This 1977 document from Imperial Oil Ltd, the Canadian subsidiary of Exxon, is a “Review of Environmental Protection Activities” undertaken by Imperial Oil Limited from 1976-1977. This document is part of the ClimateFiles Imperial Oil document set, gleaned by DeSmog researchers from the Glenbow Imperial Oil Archive Collection.

This report makes note of new environmental regulations being implemented in both the United States and in Canada, and includes poll data on public attitude about Imperial’s environmental impact: “only 21% claimed they were aware of any efforts Imperial was doing.” The document also critiques the process of environmental hearings, finding that the process, “by its nature, tends to turn all frogs into loathesome toads. Delays on projects for cosmetic surgery, or just to wear down opponents, are almost a certainty.”

The document also includes updates on Imperial’s “Major Problems,” particularly that of pipelines, stating that “pipelines handling fluids produced with water continue to be a severe mechanical problem in terms of failures, spill potential and cost.” Demonstrating the extent of Imperial’s interest and influence in policy development, the report proposes that “work will be continued with government agencies to try to streamline environmental assessment review procedures, reduce environmental study requirements and to develop more workable rules for drilling fluid disposal in the foothills.”