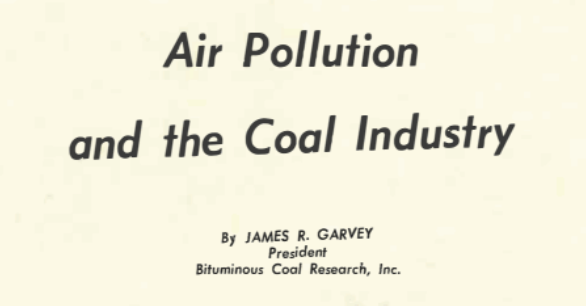 This is an August 1966 article titled “Air Pollution and the Coal Industry” in the Mining Congress Journal, by James Garvey, then President of Bitumous Coal Research Inc. Garvey’s company developed pollution control equipment. He outlines the growing push to regulate pollution from coal fired power plants.

“Growing demands for cleaner air have serious implications for the coal industry since more than half of the coal used today goes for generation of electricity and the coal-burning electric utilities are most likely to be affected by any air pollution restrictions. Garvey reviews the pollution in coal and discusses ordinances that have been passed to restrict use of fuels containing in excess of one percent sulfur.”

In the midst of an article focusing mainly on sulfur and particulates, Garvey diverges under the subheading, “Emission of CO2 Under Serious Study” and writes:

“Among the gaseous materials discharged from the stack is carbon dioxide. This is not generally considered to be a pollutant inasmuch as it has never been demonstrated to have any adverse effects on plants or animals. However, to illustrate the far-reaching aspects of the air pollution problem, it should be noted that serious studies are underway to determine whether more restrictions should be placed on the emission of carbon dioxide to the atmosphere. There is evidence that the amount of carbon dioxide in the earth’s atmosphere is increasing rapidly as a result of the combustion of fossil fuels. If the future rate of increase continues as it is at the present, it has been predicted that, because the CO2 envelope reduces radiation, the temperature of the earth’s atmosphere will increase and that vast changes in the climates of the earth will result. Such changes in temperature will cause melting of the polar icecaps, which, in turn, would result in the inundation of many coastal cities, including New York and London.”

Following Garvey’s article is a “Discussion” by James R. Jones, Combustion Engineer for Peabody Coal Co. Jones’ response is a bit urgent and defensive in tone “The coal industry is not alone in receiving the brunt of restrictive limitations. Process emissions of all kinds are under scrutiny – odors, gases, vapors, particulates, etc.”

He concludes in a somewhat conciliatory tone, writing under the subheading, “Situation is Urgent”, “There is a matter of urgency being placed on this subject of air pollution control. We are in favor of cleaning up our air. Everyone can point to examples in his own community where something should be done. Our aim, however, is to have control that does not precede the technical knowledge for compliance. We are, in effect, “buying time”. Removal of sulfur from coal and SO2 from flue gases are just two of these.”