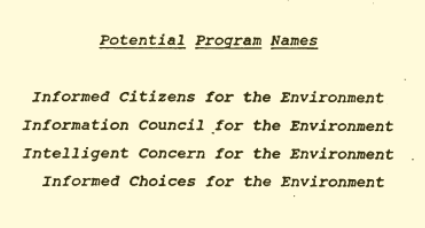 This entry contains two documents generated in early 1991 for the Information Council on the Environment or ICE. The first document is a “Test Market Proposal” for ICE that outlines a a half a million dollar campaign of “awareness” targeted in test media markets. ICE is a project sponsored by the utility trade group Edison Electric Institute (although this proposed campaign would be split by the utilities within the targeted markets). According to the proposal, the test campaign could serve as a model for national efforts and would “lay the solid groundwork for a united electric industry voice on global warming.”  Other elements of the test campaign entail efforts to test an appropriate name for the chosen acronym ICE, plans to attack “proponents of global warming” through advertising, and a goal to determine the most “advantageous population” to target.

The second document in this entry is a report on a “Benchmark Survey” of public awareness of climate change conducted between February 13th and February 22nd 1991 to serve as a primer for the test campaign described above.  This document, however, is incomplete.  The report recommends that ICE target certain audiences: 1) “older, less-educated males from larger households, who are not typically active information-seekers, . . ” and 2) “younger, low-income women” who are likely to think climate change is a real problem but receptive to new ideas.  Regarding the best way to name ICE, the report determined that people find that information from and organization that sounds like an “approachable” technical expert is most persuasive. Also, the effects of the interviews done as part of the survey were noted.  These effects included increased concern about climate change occurring in some survey participants after the interview process, and a move away from believing legislative action was appropriate to address the problem for some participants.