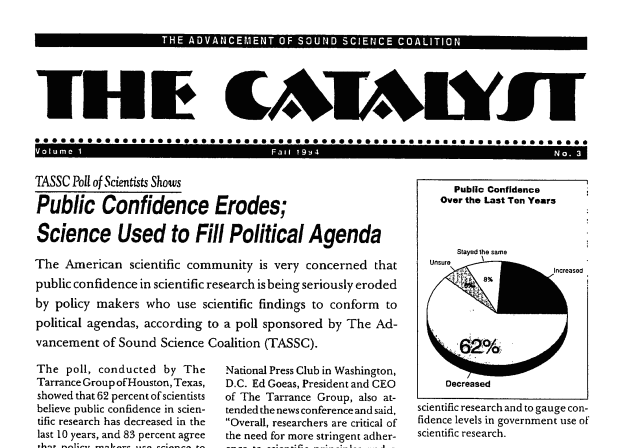 This is a 1994 newsletter from The Advancement of Sound Science Coalition (TASSC), an industry-funded front group created in 1993 to create doubt about the health and environmental risks of tobacco. The group was a front for Philip Morris, the world’s largest tobacco company which controls about half of the U.S. tobacco market.

This issue of TASSC’s newsletter “Catalyst” focuses on the results of a poll funded by TASSC which showed increased concern among scientists about the way science is used or misrepresented in policy creation. In response to this apparent concern, TASSC offers “five guiding scientific principles” to provide “a standard against which policymakers should measure research.” TASSC developed these principles with the hope to “resolve some of the waning of public confidence in government research.” Patrick Michaels is listed as a member scientist “who assisted in drafting our Statement of Principles.”

The principles, as laid out in the newsletter, are the following:

The newsletter also includes an overview of recent organizational activities, including “speaking to the American Legislative Exchange Council ” and providing written testimony for a hearing in New York City “on legislation that called for unreasonable restrictions on smoking in buildings.”

One thought on “1994 TASSC Newsletter “The Catalyst””