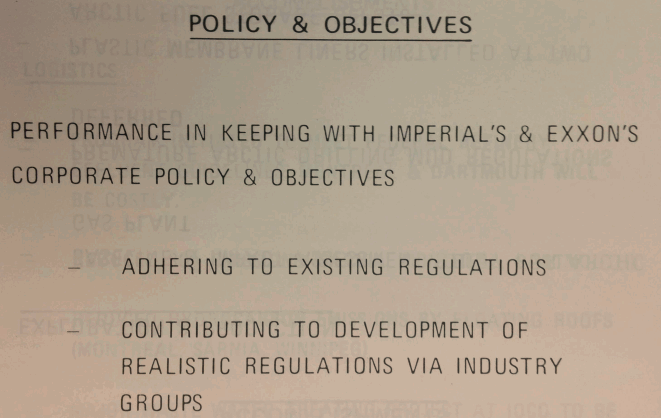 This 1973 document from Imperial Oil Ltd., the Canadian subsidiary of Exxon, is a “Review of Environmental Protection Activities.” This document is part of the ClimateFiles Imperial Oil document set, gleaned by DeSmog researchers from the Glenbow Imperial Oil Archive Collection.

This report also contains polling information and commentary from Imperial regarding public awareness and concern about environmental issues, noting that “most citizens aware that their energy wants and environmental philosophies were on a collision course, and with industry even more frustrated with ever-tightening screws of an ever-increasing bureaucracy, committed by unattainable legislated plans.” Referring to environmental policy developments in the U.S., the report observes that “it has been obvious for some time that U.S. industry and state authorities are on an inevitable collision course with the Clean Air Act.” Commenting on the Imperial’s relationship with the Canadian government and the potential for future regulations, the report emphasizes that “Vigilance will be required to ensure that process is rational; otherwise eco-mania could lead to economic stagnation.”

Also of note in this document is its research into “the problem of native peoples’ aboriginal or treaty rights as well as environmental concerns,” and its acknowledgement that “major hydro-electric developments…deprive several thousand Indians of a livelihood from traditional hunting and fishing pursuits…This recognition of broad social effects of changes to the natural environmental naturally spills over to the oil and gas sector in concern for northern frontier developments.” The report offers no suggestions about addressing these concerns.