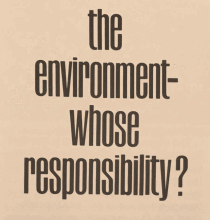 This 1975 document from Imperial Oil Ltd, the Canadian subsidiary of Exxon, is a report on “Exxon and the Environment.” This document is part of the ClimateFiles Imperial Oil document set, gleaned by DeSmog researchers from the Glenbow Imperial Oil Archive Collection.

The report from Exxon includes sections on “The Environment: Whose Responsibility?” “Economics for Environmentalists,” “Billion-Dollar Brushpiles,” and “The Cleanest Industrial Port in America.” As with many documents from Exxon and its affiliates, this report switches between more progressive stances such as “we cannot take the traditional view that use of the environment is ‘free’” and far more cynical ones which aim to deflect Exxon’s responsibility, like “in many cases the industry can do little to control some of the environmental problems related to the use of its products.”

On page 11 of the document, it is noted that “society is calling for far-reaching legislation to protect the environment. This is particularly pertinent to our business because the oil industry has a relatively high potential to pollute both air and water. And we are not opposed to such legislation; on the contrary, we see the need for sound, uniform standards.” In fact, Exxon and its affiliates were adamantly opposed to such legislation, and ExxonMobil has worked both openly and behind the scenes in national and international settings to ensure that regulations on the oil industry are weak and ineffective, even by the standards of their own research.