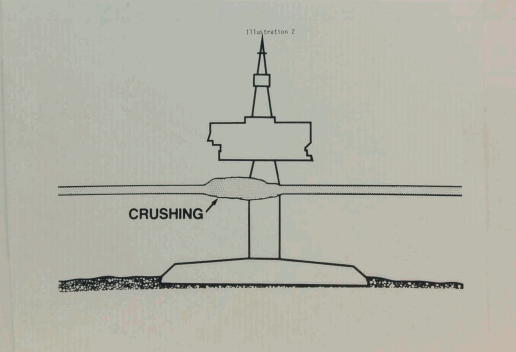 This 1980 document from Imperial Oil Ltd., the Canadian subsidiary of Exxon, is a report on “Arctic & Deep Sea Technology,” and also contains the company’s research and projections about the potential for renewable energy systems such as solar in Canada. This document is part of the ClimateFiles Imperial Oil document set, gleaned by DeSmog researchers from the Glenbow Imperial Oil Archive Collection.

The document opens with an assertion of contrast between the “romantic place of undisturbed beauty where the pioneering spirit runs free” and the vision of the North taken by Esso Resources: one of “a northland of vast mineral resources waiting to be discovered and developed.” With this framing of Canada’s North, Imperial describes their historic and recent research into the design and implementation of different structures that would allow their drilling rigs to withstand crushing ice flows and extreme sea depths. The document states that “we at Esso Resources are fortunate to be a part of this lyrical moment in the development of the Arctic frontier. We foresaw the problems of today and solved them yesterday. Today, we are solving the problems of the future.”

One such problem identified by Imperial in this document is the rapid depletion of “non-renewable fossil fuels” which are “now becoming more expensive to find and recover” and whose “supply is not infinite.” Thus, Imperial posits that “renewables — such as direct solar energy, biomass, wind, and tides —  are important options in energy for the future. They also present minimal environmental problems.” Imperial projects “higher future costs of non-renewable energy,” leading consumers to use more solar energy, with the result that “by the end of this century, renewable resources should become a significant energy source.” In pursuit of that vision, “Imperial…has accepted this challenge and opportunity to help Canada use more renewable energy. Our total budget this year is $1.4 million — probably one of the largest independently financed renewable energy research efforts in Canada.”

This document demonstrates that Imperial was actively researching solar energy in the early 1980s, and viewed it (and other forms of renewable energy) as necessary and viable forms of power for Canada, with the transition driven by a need to be less dependent on a depleting source of fossil fuels. Solar energy, on the other hand, is presented as viable even for a northern nation that receives less sunlight: “there is enough solar energy radiant on a Canadian building to meet all heating needs on a year-round basis if we had a means of storing excess summer energy for winter use.” While this document doesn’t mention renewable energy in the context of climate change and fossil fuel use, Exxon (Imperial’s parent company) was well aware of the relationship between fossil fuel emissions and the potential for climate change by  the 1980s.