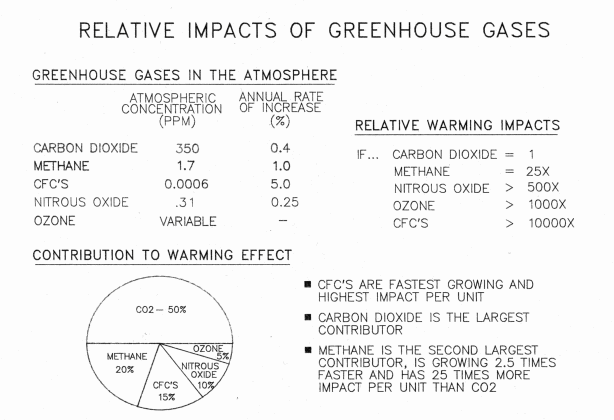 The paper acknowledged that “the possibility of global warming is a complex and potentially serious issue for the world community” and that “the scientific basis for the so-called greenhouse effect was well established decades ago,” but the authors also called into question “whether a human-induced warming effect has or has not begun, how much, if any, or at what rate the earth might warm, and how the warming will affect individual countries or regions over time.” Ultimately, the authors concluded that “it is prudent to reduce carbon dioxide emissions wherever it can be accomplished at little or no cost. However…Canada would have great difficulty in achieving meaningful reductions in carbon dioxide emissions.”

The “Canadian CO2 Emissions Challenge,” as identified in this report, is “the tremendous difficulty and cost to significantly reduce Canadian carbon dioxide emissions from fossil fuel combustion.” Of particular concern was the potential harm done to Canada’s international competitiveness if such emissions reductions were undertaken alone, rather than as part of a broader global emissions reduction agreement. The authors claimed that such “actions, if they were taken alone…would have negligible impact globally, because of Canada’s small 2% share of global carbon dioxide emissions from fossil fuel combustion.” However, the possibility of “any potential accords to reduce global carbon dioxide emissions” is complicated by the necessity of “accommodating the economic aspirations of developing countries” whose emissions “are expected to be greatest…as they industrialize and achieve significantly greater rates of economic growth than the relatively more mature industrial economies.”

While the paper emphasized the difficulty and negligible global impact of taking action to reduce emissions in Canada, Imperial’s recommendations to the Federal Government still encouraged a “broad consultative process” between “government, industry, public interest groups, academia and the general public” to address “the larger context of the environmental challenges that face the nation, including potential global warming.” More specifically, the paper called for the government to address “strategies to adapt to climate change which may occur despite our efforts to mitigate the effects.”