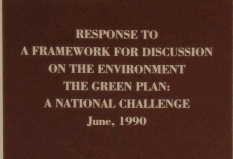 This June 1990 document from Imperial Oil Limited (IOL), the Canadian subsidiary of Exxon, is a response to the Canadian government’s “Framework for Discussion on the Environment – The Green Plan: A National Challenge” which had been released earlier that year. This document is part of the ClimateFiles Imperial Oil document set, gleaned by DeSmog researchers from the Glenbow Imperial Oil Archive Collection.

In this document’s Foreword, Imperial asserts their direct involvement “as a company, as well as through industry associations, in the recent consultation sessions held across Canada on the Green Plan.” This document builds on and refers to Imperial’s Discussion paper on Potential Global Warming released in March, 1990.

Throughout this document and many similar documents released contemporaneously by the company, Imperial emphasizes the need to prioritize “international cooperation rather than unilateral actions by individual countries” when considering actions to address environmental issues, finding that “this kind of leadership would be costly and ineffective.” Another recurring theme in this document and others from Imperial and Exxon is language about how “a strong economy provides the means to achieve environmental quality,” and the importance of “protect[ing] the ability of our economy to create the wealth that provides the resources to protect the environment.”

Despite promising language such as Imperial’s commitment to “its own seven-point work program” to contribute to a “knowledge base” about global warming, this document also shows Imperial limiting environmental ambitions with statements like “let’s not ‘out-green’ each other.” This report also exemplifies strategies of setting low expectations for environmental achievement, as shown in a lengthy critique of the “controversial concept” of “zero discharge” waste in measures of water quality. Imperial finds issue with “the constantly increasing capability of analytical chemists to identify and quantify smaller and smaller concentrations” of waste substances, leading to a perceived slippery slope of “what was considered a ‘zero discharge’ yesterday is a cause for concern today.”

This paper devotes three sentences to a section on “Potential Climate Change,” labeling it a “serious and complex international issue” and referring again to Imperial’s Discussion Paper on Potential Global Warming as it “calls for urgent steps to improve scientific knowledge to better define the problem.”

This document demonstrates some of the ways in which Canadian climate and environmental policy was informed by market-based approaches taken in the United States and “other jurisdictions” which “have experience in the use of emissions rights trading arrangements, which could be invaluable to the development of similar public policy in Canada.” Furthermore, the report highlights “a growing body of literature and practical experience, notably in the United States,” which particularly attests “to the benefits of more flexible, market-oriented approaches — such as trade-able emission rights – to achieve environmental goals.” While encouraging further research into “various economic instruments for pursuing environmental objectives,” Imperial ultimately “strongly recommends against measures such as special taxes that only indirectly recognize environmental costs in the market.”