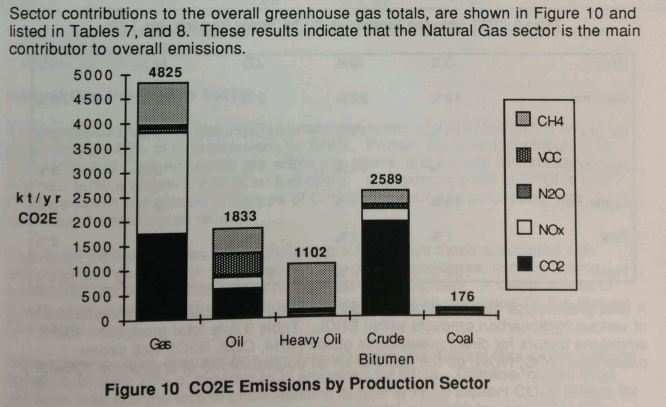 This document from Imperial Oil, the Canadian subsidiary of Exxon, is a “Preliminary Inventory of Greenhouse Gas Emissions” from May, 1991. This document is part of the ClimateFiles Imperial Oil document set, gleaned by DeSmog researchers from the Glenbow Imperial Oil Archive Collection.

This report, published by Esso Resources Canada Limited (ERCL) fulfills a commitment to the “Development of an inventory of greenhouse gases emitted from Esso Resources operations, and the identification of feasible opportunities and costs to reduce these emissions” as laid out in Imperial Oil Limited’s (IOL) March 1990 publication, “A Discussion Paper on Global Warming.”

This document states that “increasing atmospheric concentration of greenhouse gases has been linked in the last several years with potential global warming and climatic change;” the report contained in this document “represents IOL’s first attempt to quantify the greenhouse gas emission contributions made from Esso’s upstream petroleum operations, and to identify any feasible opportunities to reduce these emissions.”

In tandem with Imperial’s April 1991 “Discussion Paper on Global Warming Response Options,” in which Imperial presented findings of a commissioned study regarding the potential efficacy of various levels of a Canadian carbon tax, this document demonstrates Imperial’s understanding of and research into the potential economic impact of policy-driven greenhouse gas emissions reductions. This document makes note of the same range of tax levels identified in the April 1991 document, specified as “up to 200$/tonne of Carbon or 55$/tonne of CO2.”

The report contains many charts and tables describing greenhouse gas contributions by sector, noting that “total greenhouse gas emissions for Heavy Oil production are surprisingly high.” In identifying opportunities to reduce greenhouse gas emissions in Esso’s operations, the report differentiates between “items estimated to be ‘economically’ feasible…and those items that are ‘technically feasible’ (ie contribute towards emission reductions but are not economically attractive for ERCL to pursue).” The report’s assessment of “overall reduction potential” concludes that “the largest individual reduction opportunities for ERCL based on a 20 year time horizon are: Enhanced oil recovery (EOR); Reciprocating engine NOx reductions; CO2 and NOx reductions that occur from the introduction of air/fuel controls on reciprocating engines.”

Within the category of actions deemed by Imperial to be “economically feasible”, this report finds that such reduction opportunities would have a reductions impact “estimated at 13% of ERCL’s carbon dioxide equivalent greenhouse gas emissions and associated electrical CO2 emissions. Implementation of these opportunities would require an investment of approximately 20 M$.”