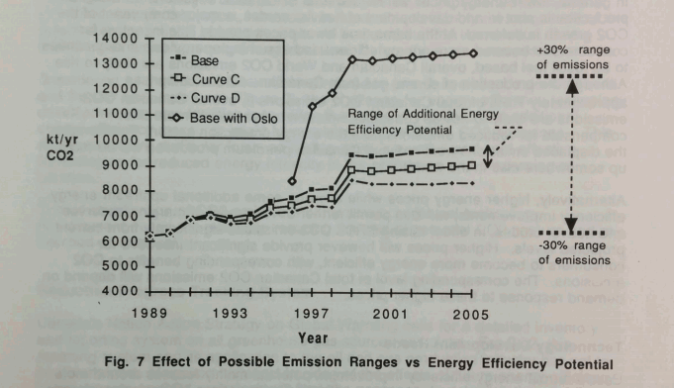 This May 1991 document from Imperial Oil Ltd, the Canadian subsidiary of Exxon, is a report on “The Potential for CO2 Reductions From Additional Energy Efficiency.” This document is part of the ClimateFiles Imperial Oil document set, gleaned by DeSmog researchers from the Glenbow Imperial Oil Archive Collection.

This report is part of a series of research papers produced by Imperial as part of the “seven point work program” to “further understand the implications of potential global warming” laid out in their March 1990 position paper on “Potential Global Warming.” This work plan included a commitment to “develop an inventory of greenhouse gases that are emitted in its operations and identify feasible opportunities and costs to reduce these emissions,” which Imperial fulfilled with its 1991 “Preliminary Inventory of Greenhouse Gas Emissions.”

This document fulfills Imperial’s second commitment in its seven-point plan, which is to “determine the technical and economic potential for additional energy efficiency opportunities in all of its operations, with an eye to reducing carbon dioxide emissions.” While the paper included findings on the relative feasibility of retrofitting efforts to improve efficiency, the simplest of which were projected to “require 10 years for 100% implementation,” the report was largely cynical about the potential success of these efforts in meaningfully reducing emissions. As with some of Imperial’s other reports from the early 1990s, this paper differentiated between projects that were “economically feasible” as opposed to technically feasible, finding that the “CO2 reductions from economic energy efficiency improvements” alone would be “unlikely to stabilize projected [Esso Resources Canada Limited] CO2 emissions at 1990 levels.”

The report further projected that “overall Canadian CO2 emissions are likely to rise as consumer emission increases will more than compensate for reduced emissions from the energy production sector.” Casting doubt on the potential for successful emissions reductions, the paper predicted that “displaced emissions from reduced Canadian petroleum production will be made up somewhere else in the world!”

Ultimately, the paper found that “100% implementation of all energy efficiency measures is very unlikely,” though it also recommended “further study” on “alternate CO2 reduction opportunities, such as the use of CO2 for enhanced oil recovery.”