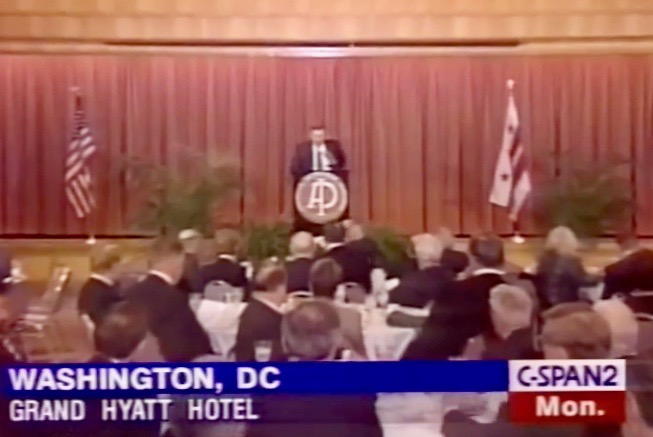 In 1996 Exxon Corporation’s Chairman Lee Raymond addressed the members and guests of American Petroleum Institute’s (“API”) Annual Meeting at the Grand Hyatt Hotel in Washington D.C. The speech championed the economic benefits of fossil fuels, industry-wide coalition building, and technological advancements. Raymond’s theme throughout the speech was “a factual, common sense approach” to contemporary issues that could “cut through the clutter of rhetoric and emotionalism.” From policy addressing acid raid, automobiles, chlorine, and climate change, Raymond likened the American public to “a nation of Don Quixotes, tilting at the windmills of imaginary or overblown threats.”

On “the issue that perhaps poses the greatest long-term threat to our industry,” Raymond reinforced his discomfort with contemporary solutions to address “so-called global climate change.” Chief among his concerns was the looming Kyoto Protocol: “Right now, a United Nations-led effort is moving toward decisions in 1997 to cut the use of fossil fuels, based on the unproved theory that they affect the Earth’s climate” (emphasis added). Raymond feared “severe economic damage, affecting lifestyles and pocketbooks around the world” and urged that “we in the industry provide a voice of common sense … [by] getting people to look at the science surrounding the issue, the economics of the policies being proposed and the impact on them as individuals.”

Targeting climate science, Raymond took a narrow view of consensus at the time. Detailing “higher levels of greenhouse gases,” he questioned the relationship between the greenhouse effect and the burning of fossil fuels, emphasizing that the “scientific evidence remains inconclusive as to whether human activities affect global climate.” Just because fossil fuels release CO2 and those concentrations are rising, he reasoned that cutting fossil fuel usage based on that information alone was “a long and dangerous leap” in the wrong direction. Citing 96% of atmospheric CO2 as produced by nature, and negating the impact of cutting human-source carbon emission, Raymond wanted scientists to have more time for analysis. The Exxon Chairman doubted the public’s support of initiatives like tradable permits and asked for more “pointed questions” to avoid “heavy burdens … in the pursuit of speculative or ill-defined benefits in the future.”

To quell “drastic action” imposed on Exxon and members of API, Raymond recounted past successes in which bringing “various groups within the industry” together had maintained the regulatory status quo. In his view, industry had been “most effective when [they’ve] kept a clear focus on [their] common interest.” According to him, “an excellent example” of collaboration producing results was the defeat of then President Bill Clinton’s 1993 BTU tax. Raymond highlighted that he and others at Exxon “mobilized our employees,” “gained support of small business,” “worked with trade groups and associations,” and “even picked up support of a wide range of energy consumers” to oppose the tax. He directly attributes this coalition to the “defeat [of] an ill-conceived and onerous proposal.”

While this victory was significant, it is not the only example of different industry players taking advantage of natural synergies. For example, he listed Exxon’s “close cooperation with the automobile industry in research programs on both sides of the Atlantic.” Labelled as “active, aggressive allies,” Raymond lauded the growing support automobile companies were receiving in helping on the “global climate issue.” Overall, Raymond painted a positive, but cautionary, picture for the attendees, whose biggest hurdle was “the insanity of basing U.S. policy on the inconsistent politics, emotions and perceptions of the moment.”

Video of this speech filmed and maintained by C-SPAN here.