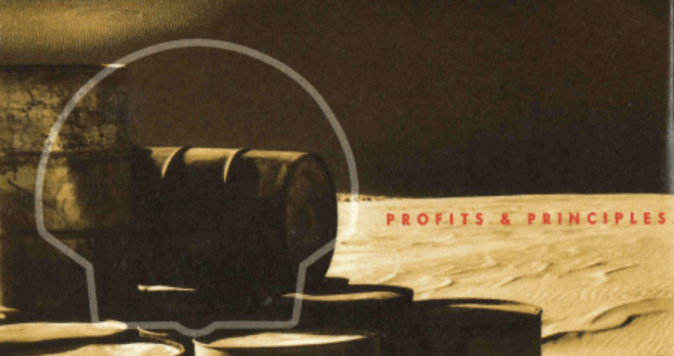 One of many internal and hard-to-find documents unearthed by Jelmer Mommers of De Correspondent, this aspirational campaign marked a public goal that “the inwardly focused Shell must become a thing of the past.” The ad campaign, as described in the “Listening & Responding” preface by Chairman Mark Moody Stewart, was designed to communicate Shell’s “commitment to the principles of sustainable development, balancing [its] own legitimate commercial interests with the wider need to protect and enhance the environment and contribute to social progress and stability.” Additionally, Shell sought to establish a “renewed commitment to … a much wider group of stakeholders … and our need to listen, engage and respond to them.”

A sampling of advertisements depicted two contrasting full page images set side-by side in a magazine spread. The left side contained the ‘wrong’ choice and the left provided Shell’s ‘solution’ to negatively perceived business practices. Some of the juxtapositions below:

One of the advertisement spreads included a discussion of climate change. On the left side of the ad, “CLOUD THE ISSUE” was superimposed in large font over the backdrop image of a cloud. On the bottom quarter, a blurb read, “[t]he Issue of global warming has given rise to a heated debate. Is the burning of fossil fuels and increased concentration of carbon dioxide in the air a serious threat or just a lot of hot air?” On the opposing magazine page,“OR CLEAN THE AIR?” headlined the ad, with a backdrop image of a mostly clear sky. A blurb towards the bottom of the page described Shell’s commitment to solving global warming, “Shell believes that action needs to be taken now, both by companies and their customers. So last year, we renewed our commitment not only to meet the agreed Kyoto targets to reduce greenhouse gas emissions, but to exceed them.”

Mentioning their newly minted Shell International Renewables unit in two of the eight advertisements, Shell relied on biomass and solar energy sources to prove its commitment to sustainability. “The sun holds such bright promise as a clean, renewable energy source … Ignoring alternative energy is no alternative,” read one advertisement. Associating their brand with the future, a page highlighted Shell’s “major part in the move from oil to gas … planting the seeds of renewable energy … committed to making renewable energy commercially viable.”