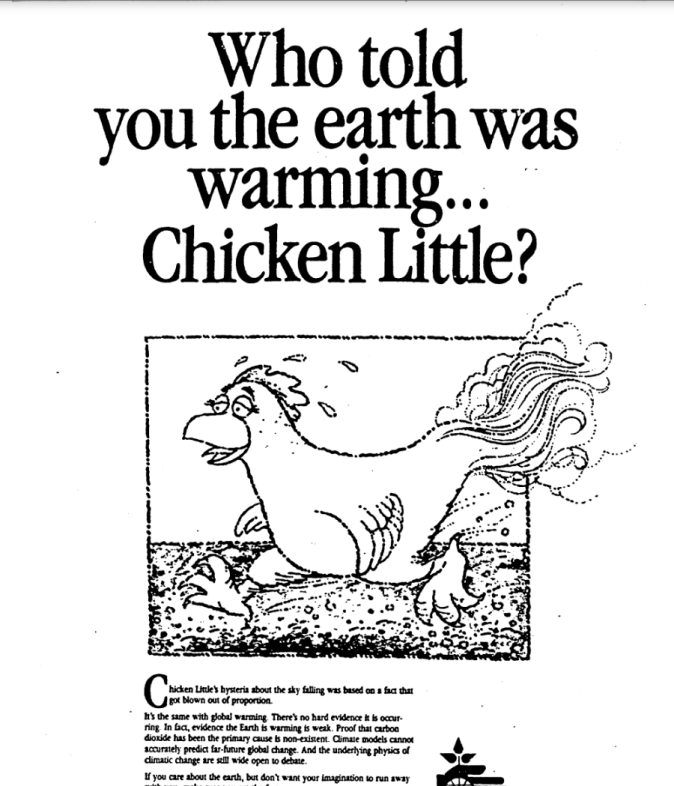 This compilation of documents contains information regarding the group Information Council on the Environment (also known as Informed Citizens for the Environment) or ICE, which was formed in 1991 to “reposition global warming as theory (not fact).” This collection reveals a public relations campaign run by Simmons advertising that tested target audiences in Fargo, ND, Flagstaff, AZ, and Bowling Green, KY.  This campaign would serve as a proving ground for examining the effectiveness of a proposed climate denial campaign for possible use nationwide as a way to sway public opinion.

This collection includes letters from Edison Electric Institute (EEI), a utility trade group, about the planned media campaign. A letter from EEI notes that the target audience that the citizens of Flagstaff demonstrate a “high level of awareness and concern” regarding the environment and climate change, so much so that EEI the sponsor of the campaign was curious to see “how the science approach sells.” Information about the intended audience was gathered through a “benchmark survey” found here. In one letter, EEI reassures its member, Arizona Public Service Company, that it can remain at arms length from the climate denial messages: “I have informed the Information Council for the Environment (ICE) that you reserve the right to distance yourself from these activities.”

Copies of print advertisements in the collection poke fun at those advocating for action on climate change. One advertisement states “Who told you the earth was warming…Chicken Little?” and another reads “Doomsday is cancelled. Again.” One advertisement claims that there is “no hard evidence [climate change] is occurring.” These ads also tell citizens how to get more information from ICE, and the compilation includes typical responses to such requests penned by climate denier, Patrick Michaels stating his belief that “the vision of catastrophic global warming is distorted.”

Other documents include a publicity tour schedule, calendar featuring air dates for ads, and a script for a radio ad read by Rush Limbaugh. According to the media plan, Rush says that “facts don’t jibe” with the “theory” of climate change and related effects like the melting of the polar ice caps, and instead places like Minneapolis have “actually gotten colder.” He urges listeners to call ICE for more “facts.”