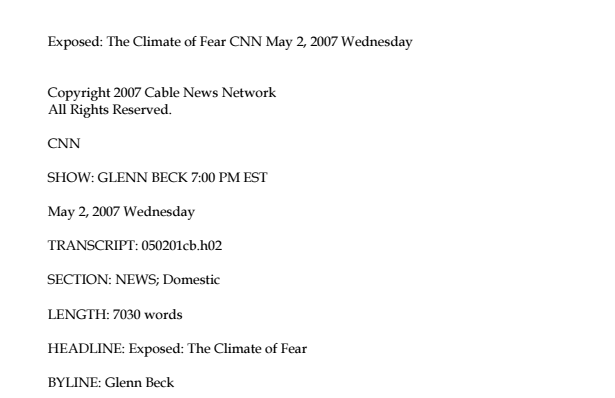 This is the transcript of an hour-long “special report” edition of Glenn Beck’s Headline News show on CNN, aired May 2, 2007 and titled “Exposed: The Climate of Fear.” The show, which Beck proclaimed would present “the other side of the climate debate,” features many prominent industry-funded climate skeptics such as Patrick Michaels, John Christy, Roy Spencer, and Tim Ball.

The show initially focuses on describing why the Kyoto Protocol was “a really unfunny and expensive joke” which, according to Michaels, would only have prevented “perhaps 7/100 Celsius” degrees of warming. Michaels’ sentiments are then echoed in an interview between Beck and Bjorn Lomborg. Lomborg, a political scientist with no peer-reviewed research in environmental or climate policy, minimized the need to reduce emissions and was frequently cited by anti-regulatory politicians and corporations. Here, Lomborg emphasized the futility of the Kyoto Protocol, saying that “we worry intensely about climate change, but the point is we can do very little good at very high cost.” He also points out that although “with global warming you’re going to see more heat deaths … we’re also going to see much less cold deaths.”

The show portrays climate skeptics who “dare to speak out” as victims of persecution, saying that climate “alarmists” will “belittle, insult and sometimes threaten the lives of those opposing voices until they’re snuffed out and can no longer be heard.” Comparing the rhetoric of the climate movement to that of “eugenics in the 1940s,” Beck says that “every generation has groups that think that they are so right they shouldn’t be questioned,” thus solidifying the moral righteousness of the climate skeptics.

Some interviewees directly address the controversy about the funding they receive from the fossil fuel industry. Tim Ball, a climate skeptic who has served as a ‘scientific advisor’ and board member to multiple industry-funded organizations, stated that he’s “accused of getting the money from the oil company, which is simply a lie.” Chris Horner, another climate change denier featured in the show, said that the people who bring up his financial ties to coal companies are generally not “comfortable with the issues or the facts and they want to change the subject.” Turning the question of funding back on the “alarmists,” Horner contends that “they receive an awful lot more in industry and industry-related funding every year … The public record is quite clear: We do not receive lots of money from big oil. And for some reason, that seems to be the claim that the alarmists want to shift the debate onto.”

Roy Spencer, another climate skeptic often appearing alongside Michaels, pointed to the Oregon Petition as evidence that the “alarmists” were shutting down legitimate scientific debate. The petition, as Spencer describes, was “signed by 19,000 professionals and scientists who don’t agree with the idea that we are causing climate change.” Designed to mimic the style of a prestigious academic journal, the petition prompted the National Academy to publish a news release stating that “the petition project was a deliberate attempt to mislead scientists and to rally them in an attempt to undermine support for the Kyoto Protocol.” The petition also included many fictional signatories, including characters from the TV show M*A*S*H.

The program concludes with Beck and his guests reiterating the many benefits of fossil fuels to society, the impracticality and undesirability of taking drastic action on climate change, and the hysterical forces of climate alarmism. “For now, all we can do is look for sober solutions in a world drunk on hysteria. The debate is not over. I have a feeling it’s just beginning.”

May 2007 Transcript of Glenn Beck’s “Exposed: The Climate of Fear” on CNN (Text)