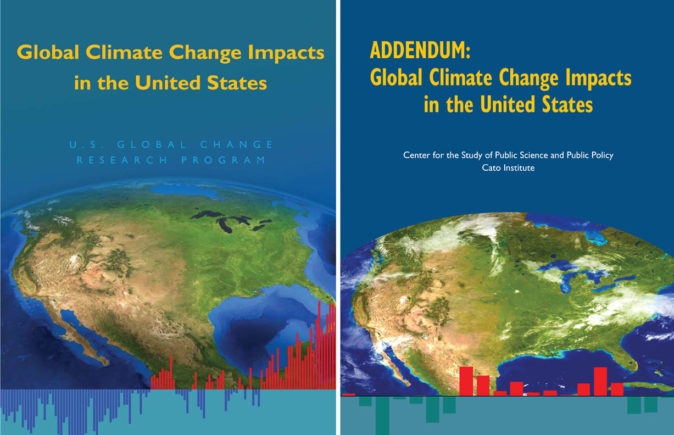 This unofficial “addendum” to the assessment by the U.S. Climate Change Science Program (now the Global Change Research Program) on “Global Climate Change Impacts in the United States” was published by the Cato Institute in 2012. The Cato report was designed to be nearly identical to the government’s report, but the content is contradictory and contains many unsubstantiated conclusions on climate science.

Despite being visually similar to the official report, many of the graphs and statistics used in the Cato addendum are made from selectively picking data to support their counterpoints to the government’s findings. The cover images of both reports show a satellite map of the United States overlaid by a temperature bar graph on the bottom. The graph on the original report shows noticeable increases in temperature overtime, but the Cato graph makes the variation seem random – this is because the graph on the original report is tracking change in global temperatures from 1900 through 2008, and the Cato graph shows only temperatures from the United States from 1991-2010.

Patrick Michaels, a career climate denier with longstanding financial relationships with fossil fuel interests, was the editor-in-chief of the report and served as the director of Cato’s Center for the Study of Science. Robert Balling and Craig Idso, who have worked with Michaels frequently in different projects, are also listed on the “Author Team” for the report. Michaels is quoted in the report, drawing from a 2009 review he wrote of the official report when it was being reviewed in draft stage: “of all of the ‘consensus’ government or intergovernmental documents of this genre that I have reviewed in my 30+ years in this profession, there is no doubt that this [the U.S. Climate Change Science Program report] is absolutely the worst of all. Virtually every sentence can be contested or does not represent a complete survey of relevant literature.” He goes on to argue that the official CCPS report is primarily a policy tool for those eager to regulate fossil fuels, a “political document that will give cover for EPA’s decision to regulate carbon dioxide.”

The release of the report drew backlash from the scientific community, with some calling it “a counterfeit” designed to intentionally mislead policy makers.