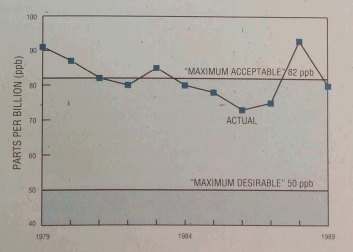 This 1991 document from Imperial Oil Ltd, the Canadian subsidiary of Exxon, is a “Discussion Paper on Air Quality.” This document is part of the ClimateFiles Imperial Oil document set, gleaned by DeSmog researchers from the Glenbow Imperial Oil Archive Collection.

The paper deals primarily “with the air quality issues of ground-level ozone, acid rain and air toxins,” and refers to earlier papers published by Imperial regarding climate change in more depth. However, it does note that “Canadians are also becoming increasingly concerned about more subtle issues such as the potential for climate change resulting from increasing concentrations of greenhouse gases in the atmosphere. This could have serious longer term implications for agriculture, forests, the Arctic and for low-lying coastal areas, due to changing sea levels.”