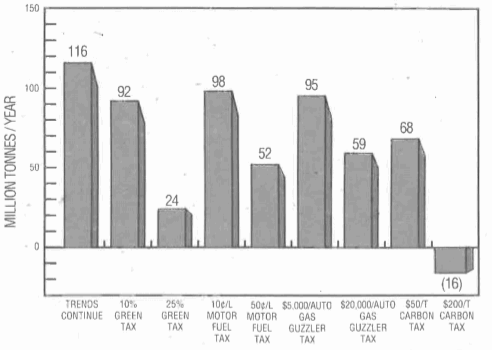 This 1991 document from Imperial Oil, the Canadian subsidiary of Exxon, is a “sequel” to a March 1990  Imperial report regarding “potential global warming.” This document is part of the ClimateFiles Imperial Oil document set, gleaned by DeSmog researchers from the Glenbow Imperial Oil Archive Collection.

A year out from its March 1990 report, Imperial is responding to a number of policy advances  internationally and domestically regarding Canada’s commitments to addressing global warming and other environmental challenges. These included a commitment “to the establishment of national strategies to stabilize carbon dioxide (CO2) and greenhouse gas emissions at 1990 levels by the year 2000” and incorporating similar goals in “Canada’s Green Plan and National Action Strategy on Global Warming.” This document clarifies Imperial’s view that such policy changes were undertaken “even though some scientific uncertainties remain and only limited progress has been made in understanding the socio-economic implications of such a commitment.”

A significant shift from the 1990 discussion paper to the 1991 paper is indicated by the acknowledgment of “emerging scientific consensus” in “the scientific debate on global warming,” noting that “many nations, including Canada, are taking the view that the risks of waiting for further research results before taking action to limit greenhouse gas emissions are far too great.” In an effort “to help fill in some of the major gaps that still remain in understanding the size of the task for Canada,” Imperial’s own research, as presented in this response paper, demonstrates a thorough understanding of the level of economic intervention required to make meaningful reductions in CO2 emissions through policy mechanisms such as carbon taxes.

This document demonstrates Imperial’s history of awareness and concern regarding the potential impact of its CO2 emissions, including “extensive engineering analysis” carried out in the early 1980s to “examine the feasibility of a large scale CO2 enhanced recovery project.”

Of particular interest within the research presented in this paper is Imperial’s examination of  the efficacy of various tax policy proposals intended to reduce fossil fuel consumption and curtail carbon emissions. Imperial’s research notes that plans to “move towards less carbon-intensive energy sources, including alternative transportation fuels” such as those laid out in Canada’s Green Plan have “limited possibilities to reduce greenhouse gas emissions,” and also found reason to limit expectations that efforts to improve “energy efficiencies can significantly reduce future greenhouse gas emissions in the industrial sector.” Rather, efforts to meet goals “such as stabilization of CO2 and other greenhouse gas emissions,” would “undoubtedly require major policy interventions to reduce energy use and, in particular, fossil fuel combustion.”

As laid out in this document, Imperial commissioned the economics consulting firm DRI/McGraw Hill (“DRI”) to conduct studies “of four types of policy measures intended in various ways to reduce fossil fuel consumption and associated CO2 emissions.” The following are the four types of policies examined in the DRI study, each of which was modeled at two different tax levels:

The Imperial Discussion Paper reviews the DRI study’s findings and concludes, “The results show that of all the policy measures considered, only the carbon tax of $200 per tonne of carbon or $55 per tonne of CO2 achieves approximate stabilization of Canada’s CO2 emissions.”

Despite these findings, Imperial’s recommendations as laid out in this paper focus on encouraging further research into “improving understanding of the complex interrelationships between global warming and other air quality issues,” “extending the work on CO2 and other greenhouse gas sources to include sinks,” and giving “new emphasis and priority to energy efficiency in its capital expenditure planning, with the goal of implementing all economic energy efficiency opportunities.”

This paper and its findings on the efficacy of a carbon tax were cited in Canada’s 1994 National Report on Climate Change to the United Nations Framework Convention on Climate Change, and in a paper titled “Degrees of Change,” prepared for the Ontario Ministries  of Energy and the Environment by the Ontario Global Warming Coalition. These references indicate the influence of Imperial Oil on Canadian climate policy at the domestic and international level, but  the extent to which this research was distributed outside of IOL is not known.