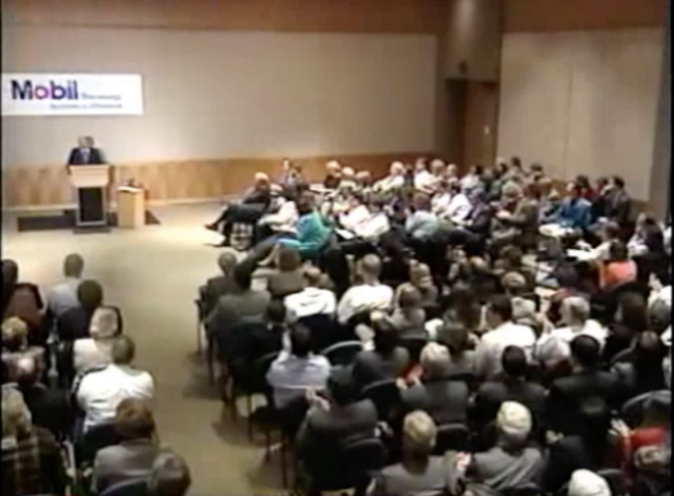 Acknowledging that “[s]ome of our employees are very upset at what they think is Mobil’s negative attitude on the Kyoto so-called climate agreement,” Noto tells staff that the company recognizes that climate change could be a “big issue.” But, he says, “we are also not prepared to admit that the science is a closed fact, and that we should take draconian steps tomorrow to reduce CO2 gases.”

Noto also details the creation of a greenhouse gas “inventory” for the company’s emissions. Their accounting determined that the emissions from its facilities represent “probably only 5 percent of the issue in Mobil’s case. Our customers using our products probably account for 95 percent of those emissions. But with the 5 percent that we’re responsible for, we’re doing an inventory.”

Noto’s remarks also speak to other organizations and individuals with a vested interest in climate change. Casting Mobil as more proactive than the American Petroleum Institute but as less willing to accept the science as BP, the leadership maintained Mobil’s prudential decision-making. Mobil’s relative position on climate is also apparent in Noto’s retelling of his “rather animated conversation” with then Secretary of the Treasury Robert Rubin, Chief of Staff Erskine Bowles, Secretary of Commerce William Daley, and National Economic Council Director Gene Sperling at the White House. There, Noto was accused of being a “lemon-sucker” as he resisted the plausibility of meeting Kyoto targets.