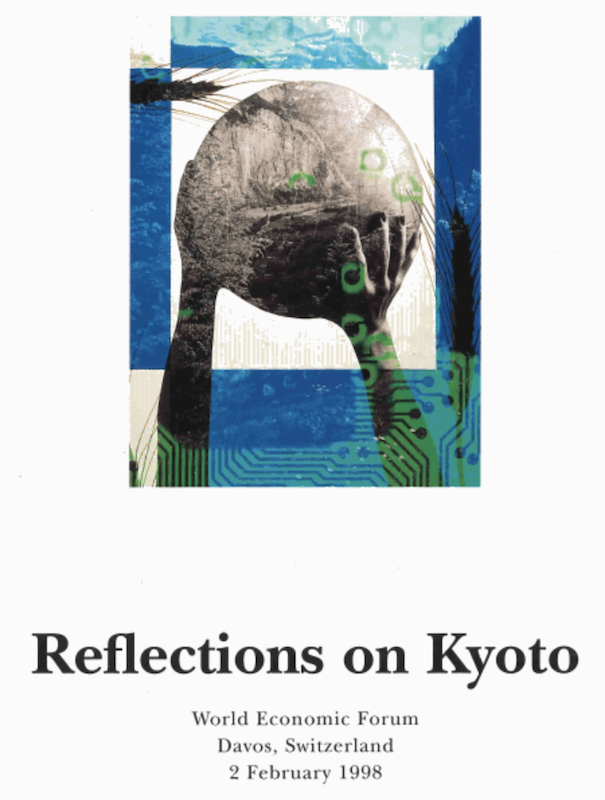 At the 1998 World Economic Forum, Royal Dutch/Shell Group’s (“Shell”) Chairman of the Committee of the Managing Directors, Cor Herkströter, delivered his “Reflections on Kyoto” to the attendees. A part of a larger group of documents unearthed by Jelmer Mommers of De Correspondent, this document marks an important time in Shell’s history as they reckoned with mounting pressure to address the climate change crisis.

Just three months before Shell withdrew from the Global Climate Coalition, Herkströter detailed his company’s complex relationship with climate change by acknowledging the need for action while emphasizing fossil fuels as a large part of the solution. “The implicit message from Kyoto is that there are no easy answers or rapid solutions,” he wrote, and “[Shell] welcomes this, and believes that continued scientific research – allied with a prudent precautionary approach – is the right one.”

Though favoring continued research “to increase understanding of the scientific, social and economic aspects of the problem,” Herkströter flatly addressed aspects of climate change that are still contentious more than a decade later. For instance, “the burning of fossil fuels, together with other human activities such as deforestation, undoubtedly releases greenhouse gases – especially carbon dioxide – into the air. And that has increased the natural greenhouse effect.” Recognizing that “the balance of scientific evidence suggests a link between climate change and human activity,” Herkströter felt Shell had “a responsibility to take prudent precautionary action.” Thus, he reasoned, “measures such as the emission limits for greenhouse gases set in train by the Kyoto agreement are necessary.”

But, as far as other measures are concerned, Herkströter was not as confident. Weighing the social and economic benefits of fossil fuel consumption and other human activities against some of the environmental consequences, he asked “[i]s it now necessary, for the long-term future of our planet, to limit such development?” Still focused on climate change being “fraught with complexity and uncertainty,” Herkströter outlined Shell’s plans for the future: “We will continue to find and produce oil and gas – efficiently and responsibly – to fuel the next 20-30 years of economic growth … We will provide more natural gas and develop our businesses in gas-fired power generation … We are moving fast in the area of renewables, with a new core business called Shell International Renewables. We will be investing $500 million over the next five years, to build a fully commercial business for the future … In the longer term we can see prospects for large-scale power generation from biomass linked to grids. We believe the conversion of sunlight into affordable energy through solar and biomass can make a significant contribution to sustainable economic development for generations to come.”