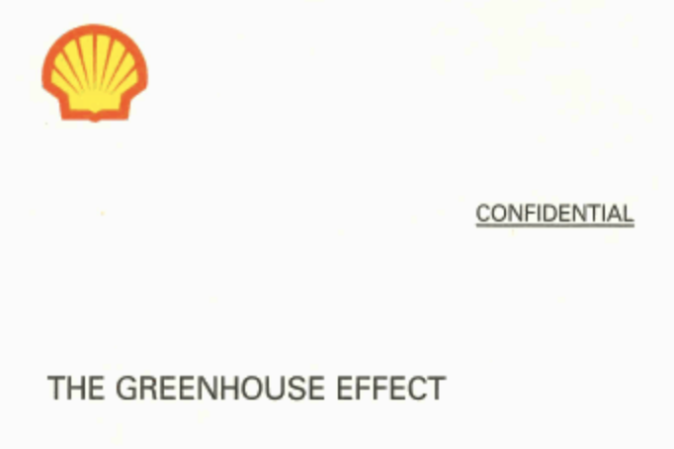 This 1988 Shell report, discovered by Jelmer Mommers of De Correspondent, shines light on what the company knew about climate science, its own role in driving global CO2 emissions, the range of potential political and social responses to a warming world.

The confidential report, “The Greenhouse Effect,” was authored by members of Shell’s Greenhouse Effect Working Group and based on a 1986 study, though the document reveals Shell was commissioning “greenhouse effect” reports as early as 1981. Report highlights include:

In short, by 1988, Shell was not only aware of the potential threats posed by climate change, it was open about its own role in creating the conditions for a warming world. Similar documents by ExxonMobil, oil trade associations, and utility companies have emerged in recent years, though this Shell document is a rare, early, and concrete accounting of climate responsibility by an oil major.

The report also includes this precautionary warning: “However, by the time the global warming becomes detectable it could be too late to take effective countermeasures to reduce the effects or even to stabilize the situation.”

Throughout the report, Shell acknowledges the central role of fossil fuels, and oil in particular, in increasing CO2 emissions. While the authors note the uncertainties and limitations of contemporary climate models — particularly around the timing and intensity of impacts — there is little ambiguity about the responsibility of the oil industry. The report states, “Although CO2 is emitted to the atmosphere through several natural processes… the main cause of increasing CO2 concentrations is considered to be fossil fuel burning.”

Later, the authors quantify Shell’s products’ unique contribution to global CO2 emissions by segment. According to this internal analysis, Shell’s products (oil, gas, and coal) were responsible for 4% of total global carbon emissions in 1984. This is one of the earliest examples of full carbon accounting by an oil major, and a larger number than calculated within Richard Heede’s “Carbon Majors” methodology of tracing carbon responsibility back to the producers.

Shell calculation for its own emissions included what is now known as Scope 3, which in Shell’s case means its fuel products used and burned.  Oil companies have avoided taking responsibility for downstream emissions -the pollution caused by their products – for decades, only capitulating slightly in recent years.

reference in the text (page 32)

Climate change could have costly and significant impacts

The report states that climate impacts could include “significant changes in sea level, ocean currents, precipitation patterns, regional temperature and weather.” It also states changes would impact “the human environment, future living standards and food supplies, and could have major social, economic and political consequences.”

Shell’s authors detail additional, specific impacts including the abandonment of cities and countries in low-lying areas (e.g. Bangladesh) and coral reef destruction, concluding these environmental and socio-economic changes may be the “greatest in human history.”

Shell’s analysis draws on much of the best available scientific research of the time, detailed in a lengthy appendix. The authors also include details of a report Shell commissioned from the Climatic Research Unit (CRU) at University of East Anglia in 1981. The research was later extended for Department of Energy and published by the U.S. government in 1984. Shell’s relationship with CRU and Director Wigley continued until at least 1985.

No surprise, Shell examines the physical, financial, and political impacts of a warming world to its own business. It notes the risk of legislation and “changing demand for our products,” as well as new business opportunities in alternative fuels. Shell also anticipates the “environmental problem” forcing a policy response, the need for international government action, and the reputational risk of “political anxiety.” It’s up to investors to assess if these and other risks were adequately disclosed in subsequent years.

In light of these “strong stakes,” the authors advise active engagement from the energy sector in discussions of policy and programs.

Uncertainty is not cause for delay

Shell notes the existing uncertainty in climate models, recognizing that while some impacts are unavoidable, the relative timing, severity, and geographic distribution of global warming requires further research and observation. Nonetheless, Shell does not advocate delaying robust consideration of possible solutions until impacts are observed. In Shell’s own words:

“With very long time scales involved, it would be tempting for society to wait until then to begin doing anything. The potential implications for the world are, however, so large, that policy options need to be considered much earlier. And the energy industry needs to consider how it should play its part.”

For a pdf of this document go here.