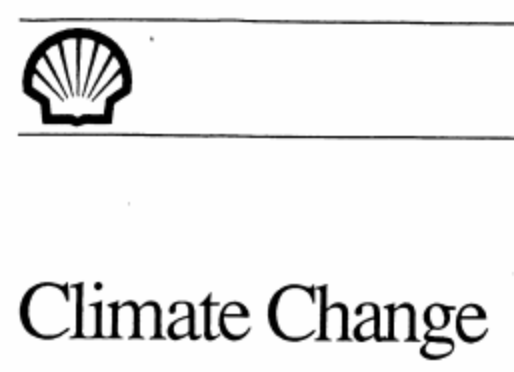 In February 1995, a management briefing titled “Climate Change” was internally circulated by the Shell International Petroleum Company Limited (“Shell”). This document, unearthed by Jelmer Mommers from journalism platform De Correspondent in a trove of internal Shell documents, appears to build off of research from “The Enhanced Greenhouse Effect” report (1994). Information from both reports is then reflected, in part, in “The Evolution of the World’s Energy Systems” (1996).

In this briefing, Shell recognized the potentially severe consequences for the environment due to “climate change brought about by global warming via man-made increases in gases such as carbon dioxide.” It also acknowledged fossil fuels as the source of anthropogenic CO2 emissions which could “give rise to an enhanced greenhouse effect resulting in global warming” and recognized this “could have major business implications for the fossil fuel industry.”

The possibility of climate change brought about by global warming via man-made increases in gases such as carbon dioxide (CO2) and methane- the enhanced greenhouse effect- is probably the most prominent global environmental issue of today and could have major business implications for the fossil fuel industry". (p. 1)
View entire document on DocumentCloud
"Man's activities have contributed to emissions of these gases from the use of fossil fuels, particularly since the Industrial Revolution…The increase in concentrations of greenhouse gases has caused concern that this will give rise to an enhanced greenhouse effect resulting in global warming". (p. 2)
View entire document on DocumentCloud

Discussing international cooperation on climate change (including the 1992 Framework Convention on Climate Change and the 1995 Conference of the Parties), the briefing focused on the climate science underpinning international action. Beyond the perceived “controversy” surrounding the science and its implications, Shell agreed upon “scientific fundamentals” including:

The increase in atmospheric greenhouse gases "has led to an increase in radiative forcing of about one percent of the total incoming radiation. (While this may appear small, it is important, since living organisms can tolerate only a relatively small range of temperature.)"; "The rate of increase of atmospheric greenhouse gas concentrations is faster than previously experienced during the history of civilisation"; "Natural factors such as volcanic activity, solar orbit, patterns of ocean circulation and human activities other than fossil fuel consumption (eg deforestation and urbanisation) can also significantly affect climate, causing warming or cooling". (p. 2)
View entire document on DocumentCloud

Despite recognizing the position of the International Panel on Climate Change (“IPCC”) as a reflection of the “scientific consensus,” the briefing emphasized “a significant minority outside the IPCC” who believed “the concerns over global warming to be exaggerated and misguided.” The briefing challenged IPCC conclusions citing the opinions of skeptics that argued “there is no statistically significant evidence that climate has been affected in the way predicted” and that the effect of greenhouse gases on warming “could be negligible” when other factors are considered.

The briefing outlined “The Shell Position” on climate change which was based on two components: the “scientific case” for climate change and the possible “evolution of the world’s energy systems,” including alternative energy futures. In regards to the science, Shell conceded that it is “not possible to dismiss the enhanced global warming hypothesis as scientifically unsound” and that there is “enough indication of the potential risk for governments to address the issue.” However, it cautioned that “any policy measures should take into account explicitly the uncertainties in the science.”

In its analysis of future world energy systems, Shell explored two possible scenarios labeled “Sustained Growth” and “Dematerialisation.” Innovative technologies surrounding dematerialisation allow for significant energy conservation which “Sustained Growth” lacked. However, both scenarios relied on the assumption that energy supply from fossil fuels would plateau by 2030, begin to decline, and be replaced by renewable energy sources. Shell predicts that “CO2 emissions would peak in both scenarios at about 10 GtC/year” before the middle of the 21st century. Shell uses these scenarios with an emphasis on the uncertainty of climate science to advocate for policy inaction.

Leaving its faith in the free market to drive the energy industry towards improving energy efficiency and renewable technologies independently, Shell resisted climate policies beyond “no regrets” measures. Anything more, it deemed, “could be premature, divert economic resources from more pressing needs and further distort markets.”

The company’s consistent concern with “policy responses” is also apparent in the graphic “Global warming, the Circle of Uncertainty” (embedded below). The graphic symbolized how man-made climate change could lead to socio-economic consequences. It also highlighted the power of policy responses to shape those consequences. These policy decisions, presumably informed by the IPCC, appeared to concern Shell the most.