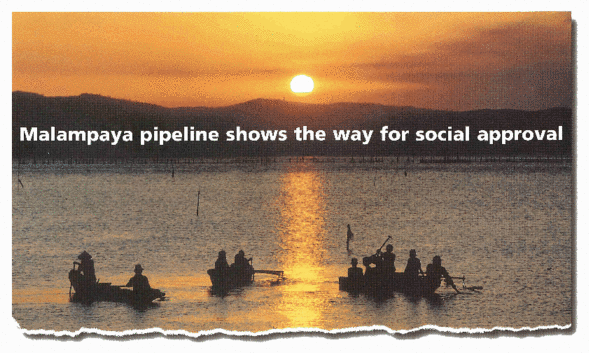 These 1999 documents relating to Shell’s report “Sustainable Development – making it happen” are a part of a larger collection discovered by Jelmer Mommers of De Correspondent in a trove of internal Royal Dutch/Shell Group (“Shell”) documents. Below is a cover letter, report, pamphlet, and sounding board feedback on the report, in that order.

I. Cover Letter
The March 1999 cover letter from Clare Harris of Shell’s Social Accountability Team was mailed along with Shells’ Sustainable Development Management Framework (“SDMF”) and a report of the feedback received on the SDMF by Shell employees at various levels.

II. “Sustainable Development – making it happen” Report
Following a far-reaching bribery scandal in Nigeria, the Brent Spar debacle, and the death of activist Ken Saro-Wiwa, Shell launched a highly publicized rebranding campaign and worked to regain consumer confidence by integrating a “commitment to the principles of sustainable development, balancing [its] own legitimate commercial interests with the wider need to protect and enhance the environment and contribute to social progress and stability.” This report, published in the same year as the “Profits and Principles” ad campaign, is an internal document including strategies and advantages of sustainable development, examples of past implementation, and resources for Shell employees to more effectively implement the SDMF.

The report begins by defining sustainable development and framing it in the context of Shell’s operations:

"Sustainable Development is about integration and balance. Integrating the economic, social and environmental aspects of everything we do and balancing short-term wants with long-term needs. Sustainable Development applies to everyday choices we make like how we dispose of our waste as much as to large regional projects." (p. 5)
View entire document on DocumentCloud

While discussing the importance of incorporating Sustainable Development practices into Shell’s operations, the report also reiterates throughout that this process isn’t “reinventing the wheel,” and that many of the practices in the SDMF are already in practice in other ways at the company. The report also briefly addresses climate change as a potential concern for customers weighing economic and environmental costs: “People want access to reliable and cheap sources of energy, but then they worry about the possible impact on global climate.”

As an example of Sustainable Development principles in practice, the report looks at Shell’s Malampaya pipeline project, undertaken in the late 1990’s, as one that “shows the way for social approval.” The report emphasizes the importance of curating social acceptability for the pipeline project, despite concerns raised by community members about “possible changes in water temperature that may adversely affect the fishing habitat,” pollution that “could affect their source of livelihood,” “the instability of the Mindoro tectonic plates, or the possible disturbance of coral reefs when laying the subsea pipelines.”

The legitimacy granted to these concerns by Shell was mixed: “Not all the local communities’ environmental anxieties were figments of their imagination. There were, however, myths and exaggerations that needed to be corrected.” As Shell’s campaign for social acceptability of the pipeline progressed, the report states that “[t]he locals learned to understand that natural gas is an environmentally-friendly methane gas that may lessen the annual atmospheric CO2 emissions.” Ultimately, the Shell team “eventually chose the offshore route for the pipeline,” and sees the project as a triumph of community engagement: “From Shell’s point of view, life does look brighter for more Filipinos.”

"Not all the local communities' environmental anxieties were figments of their imagination. There were, however, myths and exaggerations that needed to be corrected." (p. 21)
View entire document on DocumentCloud

The report then shifts to a stakeholder-engagement exercise in the form of a fictionalized letter about a family deciding to move to a new neighborhood. In the letter, the writer “James” describes his reasons for wanting to move — to be near a quieter neighborhood, closer to his work, and near a good school for his children. The move, as he describes it, is in everyone’s best interests. His children in this scenario play the role of the stakeholders with whom the father must engage in order to make their concerns feel heard. His sons want bigger bedrooms, and his young daughter wants to go to a nursery school. To accommodate the interests of all the children (stakeholders), the father (Shell) “talked it over and agreed that we would have to make compromises.” The letter is marked with symbols on each paragraph indicating which phase of the stakeholder engagement process is being represented in the scenario, including reflection on areas for possible improvement: “If I had to do it again I would have tried to check the route to work first … oh well next time I’ll know better!”

The next section of the report is a “Toolkit” for the SDMF. The toolkit is a directory to other resources at Shell’s disposal, ranging from online resources to external references and new training courses. The toolkit prompts employees to engage with “tools” like systems thinking, impact assessment exercises, and checklists of questions to be asking throughout the process of integrating the SDMF.

The last pages of the report are dedicated to the “Sustainable Development step by step” booklet, containing physical checklists of things for employees to consider when beginning phases of stakeholder engagement, communication, monitoring, and strategy definition. The checklists heavily emphasize steps of bringing stakeholders and community members on board, with few members of environmental management or monitoring. One of the lists prompts employees to “research stakeholder: internal knowledge; external contacts; empathy; links to other stakeholders.” Another encourages employees to “test the water — plan approach sensitively: scale; culture; confidentiality; people involved.”

III. Website Pamphlet
The pamphlet titled “Sustainable development – Our aspirations, our commitments” defines Shell’s sustainability program and covers their explicit goals, providing insight into Shell’s changing business model and their increased attention to the environment. While the pamphlet shows openness about the impact that sustainable development might have on Shell’s bottom line, it also makes clear that the company sees a possibility for profit in making these changes. “Finding this balance between the long-term and the short-term requires us to think about more than just how much money we will make today … Because Sustainable Development means taking a broader, more integrated approach to our business, it opens up exciting business opportunities in emerging markets and new customer groups.” However, the pamphlet remains vague about what Sustainable Development practices mean for Shell: “It is clear that we are on a journey and not aiming at a known end point.” The pamphlet contains excerpts from the longer report released by Shell and described above.

IV. Sounding Board Feedback Document
The last attachment is a response from the “Sounding board,” comprised of Shell staff, to the greater 63-page report in which they were polled on their understanding and investment in the SDMF. The results of this polling are outlined in the document and provides insight into the internal processes around education, understanding, and implementation of sustainable development practices. The analysis includes data on the accessibility and appeal of information on the SDMF, as well as opinions about implementation timelines and the persuasiveness of the case made for Sustainable Development practices. Notably, the report includes a graph showing that more than half of respondents disagreed or strongly disagreed that the documentation effectively made the case for Sustainable Development.