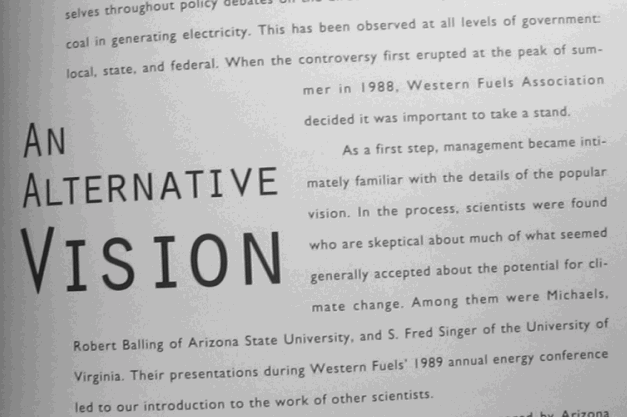 In this segment of the Western Fuels Association’s (WFA) 1993 annual report, WFA recounts the beginning of its relationship with climate deniers including Patrick Michaels, Robert Balling and Fred Singer. It states that as part of a “first step” by WFA management, “scientists were found” who were “skeptical about much of what seemed generally accepted about the potential for climate change.” The association relied heavily on the work of Patrick Michaels who opposed what he defined as the “popular vision”, which “portrays as catastrophic the potential for global climate change caused by emissions and carbon dioxide from society’s fossil fuel use.”

The document also highlighted a “1990 research symposium”, which WFA financed (this may be the same “meeting of 28 scientists” referred to in WFA’s 1991 annual report). The symposium concluded that a doubling of carbon dioxide would result in warming “far below” that which “fuels the popular vision” of climate change. In addition, it concluded that most warming would occur in the night, which “prevents most of the deleterious effects of global warming and in fact lengthens growing seasons.”

Unfortunately, our team was unable to find a complete copy of this document. Do you have a complete copy? Submit securely and anonymously here: http://www.climatedocleaks.com/.

For more annual reports and documents on WFA, search for the Western Fuels Association within Climate Files.