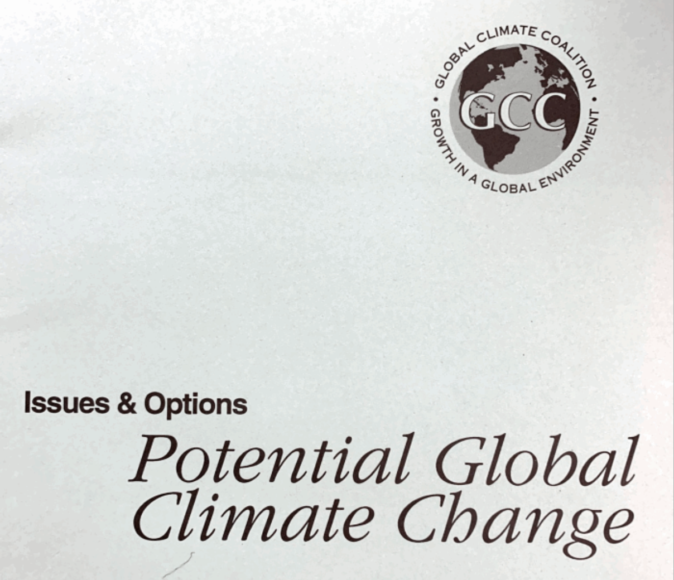 This document is a report by the Global Climate Coalition (GCC) titled, “Issues & Options: Potential Global Climate Change.” The GCC was an industry-funded organization that opposed greenhouse gas regulations through direct engagement and collaboration with affiliated climate deniers from 1989 to 2002. Its membership spanned across the automotive, utility, manufacturing, petroleum, and mining industries.

After exploring “Climate Science,” “Economic Issues,” and “Policy Analysis” in three distinct sections, the report concluded that “the claim that serious impacts from climate change have occurred or will occur in the future has not been proven” and “consequently, there is no basis for the design of effective policy action that would eliminate the potential for climate change.”

The report cited climate deniers such as Patrick Michaels, Richard Lindzen, and Robert Balling as advancing “evidence supporting the view that the greenhouse effect has been strongly overstated.” In a section titled, “Recent Critiques of Global Warming Hypotheses,” the report highlighted their work stating:

“These scientists cite records of past climate change that are distinctly at odds with model results. They point out that other factors, such as solar variability, could be dominant agents of past and future global change. They call attention to the point that many impacts of climate change could be positive … Many of these arguments have received far less attention than they deserve in past assessments of climate change … Even though these hypotheses and arguments do not eliminate concern…they are extremely relevant for future scientific research and policy analysis.”

These arguments and individuals have been repeatedly touted in GCC publications. Mobil Corporation’s Lenny Bernstein would eventually discredit both Lindzen’s and Michaels’ work in an internal GCC draft primer on climate change as “not convincing.”

The following excerpts from the report either undermined the scientific consensus on anthropogenic climate change, downplayed predicted consequences of warming, or advocated for little to no action to address carbon emissions.

Challenging the validity of climate models and downplaying the predicted consequences of climate change: