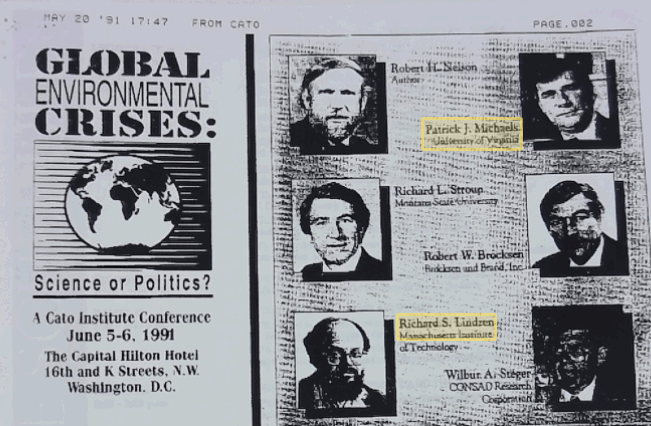 This is an advertisement and schedule for a 1991 Cato Institute Conference titled “Global Environmental Crises: Science or Politics?”. The conference was a preemptive gathering before the 1992 United Nations Conference on Environment and Development in Rio de Janeiro. Cato worried the upcoming Rio conference was a sign of “marching toward a new world order of population control, economic planning, and ‘sustainable development’” while ignoring “the economic, societal, and personal consequences of such changes.”

The schedule for the event highlights panel discussions with long-time spokesmen for climate denial and skepticism, including Patrick Michaels, Richard Lindzen, Robert Balling, Jr., and Fred Singer, all of whom have financial ties to the fossil fuel industry. According to the schedule, Michaels delivered a presentation on “The Political Science of Global Warming,” followed by speeches from Balling and Singer on “Interpreting the Global Temperature Effect” and “The Flaws in the Stratospheric Ozone Thinning Hypothesis.”

In the section titled “About the Conference,” the flyer laments that the changing values of environmentalism threaten to place a burden on wealthy people; “The principle that the polluter should pay has been replaced by the cynical principle that those with the deepest pockets should pay.” However, “instead of accepting more regulation and possibly jeopardizing our common future,” Cato organized this conference to bring together “scientists and policy analysts who offer alternative perspectives on environmental crises in the interests of rational and humane decision making.”

In May of 1991, one month before this Cato conference, Balling and Michaels both participated in a climate-denial PR campaign sponsored by the Information Council on the Environment (ICE), a now-defunct group founded by pro U.S. coal entities such as the Western Fuels Association and the Edison Electric Institute. Michaels, Balling, Lindzen, and Singer have been prominently referenced as experts on climate issues on behalf of the oil industry for nearly two decades, in legal testimony, reports, conferences like Cato’s, and news coverage.