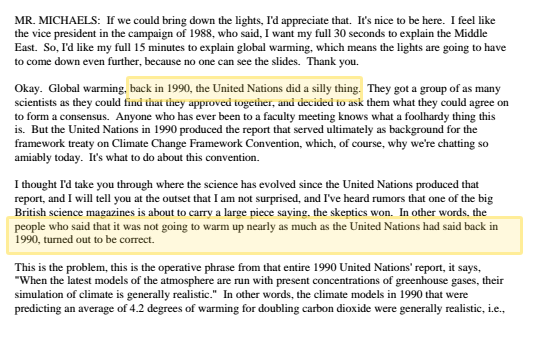 This is the transcript of a moderated debate between Alan Robock, a climatologist from the University of Maryland and Patrick Michaels, a climate change skeptic with long standing financial ties to the fossil fuel industry. The topic of the debate was “Must We Act Now To Avert a Climate Catastrophe?” and was part of a longer conference hosted by the Competitive Enterprise Institute called “The Costs of Kyoto” which took place on July 15, 1997. Ben Wattenberg, the moderator of the debate, was a Senior Fellow at the American Enterprise Institute.

Throughout the debate, Michaels takes the stance that there is no need for urgent action on climate change. He labels the call by the United Nations for a global treaty on the issue “a silly thing” and argues that the predictions made in 1990 about magnitudes of warming from climate change had already been proven wrong – meaning climate skeptics had been proven right. Primarily citing the work of other noted industry-funded climate skeptics like Roy Spencer, Robert Balling, and John Christy.

Michaels’ arguments center on the idea that we shouldn’t care so much “whether it warms,” but rather “how much it warms” and when. If the warming is “primarily in the winter, you don’t care very much. If it’s primarily in the night, you don’t care very much.” However, “[i]f it’s in the summer days, you care a lot more.” Michaels concludes his opening remarks with a “one-minute diatribe on how federal climatologists don’t really tell you the truth, and how your government is trying to mislead you,” citing one instance in which predictions about intensifying rainfall were mischaracterized as being particularly catastrophic. Michaels stages this example as grounds to dismiss all the predictions and modeling around climate change as “rhetoric.” He goes on to note that the aforementioned rains would probably be welcome given the day’s hot temperatures, and that they would “probably do wonders for Virginia agriculture.”

Robock prefaced his remarks by contrasting his financial relationships with Michaels’, saying “I don’t get any money from any interest group. I don’t have — I don’t represent anybody except for myself. I’m part of the international scientific community.” He argued for the general reliability of climate models, and that some of the figures Michaels presented were taken out of context: “The figure Pat showed … showed cooling after the data Ben used, and that’s because there was the huge Mount Pinotuba volcanic eruption just after that. We understand that. That is what climate models predict.”

Michaels admits that “there will be a human influence on the climate,” but maintains that “it’s not going to be very much” and that we shouldn’t be spending money to stop the “warming of the coldest nights in the winter, the lengthening of the growing season and the greening of the planet.” Michaels also acknowledges the severity of action required in the case of a serious climate problem: “You have to reduce emissions by 60 to 80%, if you believe it’s a serious problem … I don’t think it’s real moral of us to plan the energy structure of a society 250 years from now” given that our current dependence on fossil fuels “only resulted in everybody living twice as long as they do, and living a very nice life.”

Robock and Michaels took a few questions from the audience, including one from Fred Singer, another Koch-affiliated climate skeptic, in which Singer seemed to question the dependability of models given that, being models, their inputs are necessarily “artificial.” The discussion then turns to the extinction of the dinosaurs as a result of climate change induced by the impact of an asteroid, and then to the general adaptability of humans to new climates. Michaels argues that we are already evolutionarily adapted to a warmer planet, since “human beings evolved in Africa.” Conflating climate with temperature, he states that “when all the human beings lived in Africa … the temperature in which they lived was a little bit warmer than two degrees C above the current temperature.”