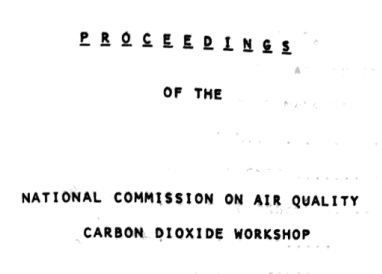 As first brought to light by Nathaniel Rich’s NYT magazine article “Losing Earth,” this document is a transcript of a 1980 meeting held by the National Commission on Air Quality (NCAQ). The meeting, requested by Congress, was held to discuss the societal implications of climate change in order to address problems “from increased carbon dioxide emissions.” Despite agreement that climate science merited serious action, this transcript highlights how the complexity of the issue and the range of vested interests made curating climate policy a painstaking task. Absent a consensus on the language and scope of the workshop’s policy prescriptions, confirming policy itself proved to be fraught.

Over the course of the meeting, participants grappled with questions of “moral imperative,” asking:

With the weight and breadth of those questions looming, discussion bounced from one broad topic to the other in what NCAQ member Jeanne Malchon described as “the three E’s: Energy, economy and environmental relationships.” Topics ranged from predicting Antarctic ice-sheet melt to the “portfolio of investments” necessary to wean the U.S. off its reliance on fossil fuels.

Indicative of the wide-ranging discussion, the two dozen participants of the two-day meeting represented a variety of academic institutions and federal government entities with diverse backgrounds. Given the  wide array of expertise, the broadness and complexity of the task they were given, and the constrained time period for discussion, it is unsurprising that the group was plagued with indecision.

I. Discussions on Climate Change and Mitigation

Regarding climate change specifically, no one objected to the fact that its impacts could be potentially “cataclysmic,” however, debate swirled around the likelihood of such dramatic events, when they may occur, and what threshold of CO2 emissions would trigger them.

Despite the challenges that uncertainty posed, the need for action was a continuous thread throughout the meeting. As M.I.T. professor David Rose stated, there were “big implications” if a transition to low carbon energy sources was delayed. Echoing this need for action, National Academy of Sciences’ John Perry suggested policy to make it “more difficult to pursue things that increase carbon dioxide emissions.” Demonstrative of the friction between the participants, Henry Shaw from Exxon’s Research and Engineering Company took a counter approach, cautioning that “we are not going to stop burning fossil fuels and start looking toward solar or nuclear fusion and so on.”

As the only corporate representation from the fossil fuel industry present at the workshop, Shaw advocated instead for a “transition period” where “synthetic fuels makes sense.”  The moderator, Thomas Jorling from the EPA, questioned if investments in such transition fuels would impede progress to a truly sustainable energy system. When challenged with the question of when investment creates “too much energy around a transition fuel that will have to be left behind,” Rose commented that they should “leave that for a debate with Exxon people.”

The debates culminated in varying efforts to craft policy recommendations to Congress. The group did agree that an array of action would be needed to address the problem of CO2 emissions, however, the character, timeline, and implementation of action was a topic of contention. Some suggested an amendment to the Clean Air Act or handling CO2 in the same fashion as acid rain pollutants. Others felt that the issue may be too large for “the traditional pollution control legislation,” which did not address efforts to encourage renewable energy and restructure the tax code.

John Hoffman of the EPA characterized “reasonable actions” to curb carbon dioxide emissions as taking “what economists say seriously” and putting “a tax on [emissions].” Similarly, as another way of “getting a better price on [carbon],” Rafe Pomerance of Friends of the Earth suggested starting small and simply “desubsidizing” fossil fuels.

Reflecting the perceived difficulties of agreeing to specific policy action, David Slade from the Department of Energy summarized:

“Although the potential may be very high, the information is very limited, the verification is distant, immediate action is controversial, and late action may be useless.”

Professor Rose briefly entertained a scenario of such “late action,” where the world did nothing to curb emissions and relied instead on future technologies. He commented that after looking at a number of solutions, “a technical fix for the CO2 problem,” such as taking CO2 directly out of the air, was unrealistic and “very unlikely.” Mitigation was clearly the ideal pathway.

Over 30 years after this workshop was held, the Intergovernmental Panel on Climate Change still emphasizes that removing carbon dioxide “at scale is unproven and reliance on such technology is a major risk in the ability to limit warming…”  Despite this, recent IPCC reports include what they call “Carbon-Dioxide Removal” technologies as crucial components of proposed pathways to stay below dangerous levels of warming.

Jorling described the policy recommendations being discussed as two distinct pathways. The first option would be to produce recommendations with a certain vagueness that included support for “conservation and renewable resources,” but allowed “people to interpret it the way they will.” The second path would require they “go further” and “be more honest,” about the “advantage that the government policies presently have toward fossil fuels…” As ecologist George Woodwell stated, it would mean identifying that “the growth in the rate of the use of fossil fuels is the problem.”

Mitch Tyson, legislative assistant and former chair of the Senate Energy Committee, summed up the choice of language as an issue of political practicality when he commented:

“My hesitancy would be to make it explicit, that we essentially want to take money out of coal programs and syn fuel programs and essentially put something in there that politically could be a problem… I mean it is implied…”

Formulating a final report became a painful slow dance between drafting the most accurate scientific language and conveying the proper sense of urgency, which many felt was necessary to motivate political action. Spending the majority of the second day of the workshop stuck on phrasing for the first paragraph, the group adjourned without being able to “concur upon a range of appropriate policy responses,” which the meeting was administered to accomplish.