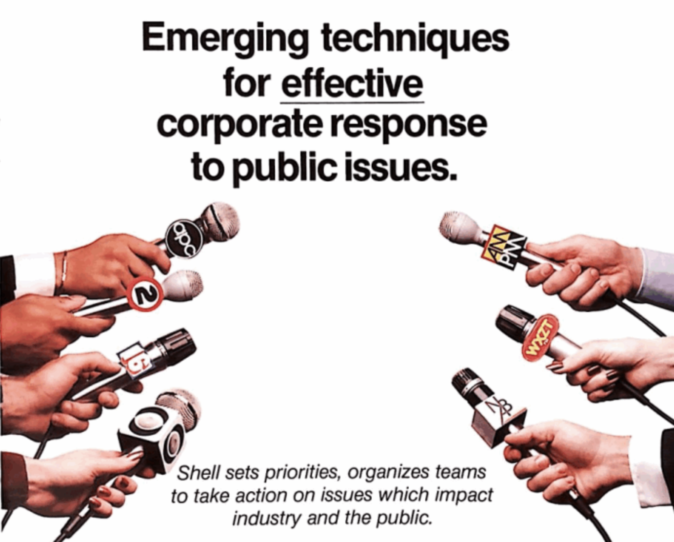 This 1980 edition of TREND, a bimonthly Shell Chemical Company (Shell) publication, featured a series of articles on issues concerning the company, including:

I. A New Public Relations Strategy

TREND’s first two pieces highlighted the company’s increasing collaboration with trade associations in their effort to shape public opinion and the expansion and restructuring of Shell’s Public Affairs division. Although the document does not address climate change directly, it illuminates the communication tactics utilized by Shell for environmental issues at large.The strategies outlined in this document to gain “social approval” were implemented for years to come, most notably, in its Profits and Principles ad campaign.

Shell’s new public relations approach was aimed at shaping issue narratives not just in Washington, but in the home of the consumer. Shell hoped to avert what the company deemed “unnecessary” regulations by preventing negative publicity such as executives having to “answer questions that hadn’t been anticipated” before a “Congressional committee or the press.”

“The legislative process has been working long before it reaches Washington… energy policy is formed as people talk to legislators. And legislators talk to one another. At home. Because we fail to become involved in these early stages, we are forced to react– in Washington — as policy suddenly appears…”

Corporate managers wanted to address public issues concerning the company before they reached “the legislative halls and the company [was] faced with an investigation committee or a government agency out to enforce new legislative mandates.” As part of this new strategy, Shell would deploy an “all-out effort to reach opinion leaders and legislators” on priority issues. These tactics ranged from providing “expert testimony before a Congressional Committee” to reaching out to employees, customers, and investors.

In order to illustrate how unmanaged public opinion could result “in costly and restrictive regulations,” the publication recounts the consequences of “unfavorable publicity” on railroad derailments, including TV interviews with “employees who fear[ed] for their lives” as track infrastructure deteriorated.

Despite efforts by the Chemical Manufacturers Association (CMA), a trade association for the chemical industry, to communicate “the industry’s story on a broad front,” Shell lamented that the railroad derailment issue is “far along” and threatens to “unnecessarily complicate various segments of the chemical industry” with government involvement.

In addition to Shell’s efforts with CMA to shape public opinion and policy, the company also offered support of CMA “grassroots” initiatives in the form of “leadership, resources, manpower and funding.”

One such initiative, a “five-part communications/action plan” named ChemCAP, was conceived by the CMA after studying public attitudes towards the chemical industry.  Shell management was actively involved in the plan which targeted policy makers and consumers alike on “major issues” such as worker safety and environmental hazards.

ChemCAP armed member companies with an array of sophisticated materials including pre-made advertisements, informational booklets, and even “a science advisory group to serve as industry spokesmen on nationwide media tours.” The final stage of the initiative involved a “grassroots level” communication strategy in identified communities of “chemical plant concentration.”

The publication also mentions another “grassroots campaign,” of which Shell was activity involved, that focused on feedstock allocation issues. This effort was “spearheaded” by a different trade association, the Society of the Plastics Industry. Ken Spalding, a manager within Shell Chemical, reflected that the company was “fortunate” to have the time “to launch and carry out” the effort, aimed at influencing legislation for the following year. Spalding emphasized that in order for public attitudes to be “cleared up and swayed,” there needed to be a sustained effort by “the industry at large.”

Supporting the sentiments of Shell management, the publication points out that because carcinogens and other hazardous spills “turned the pubic spotlight on chemicals more than at any previous time in the industry’s history,” efforts to shape public perception had “never been more timely.”

Other topics in the publication include: