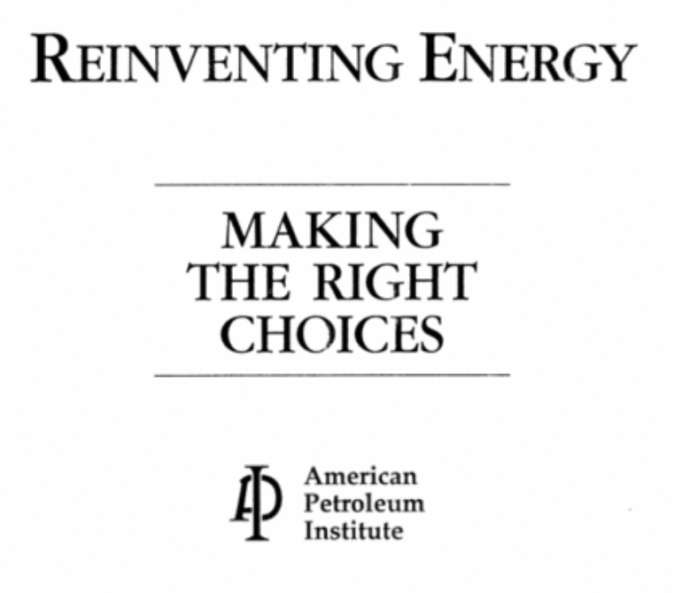 API’s stance on the global impacts of climate change was dismissive and American-centric. Recognizing that climate change “would seriously affect some regions of the world,” the authors heedlessly assumed “[m]ost societies (even without government policies) would likely adapt.” Domestically, the “negligible” 3% of US GDP with “a high potential of being affected” supported their belief that “climate change would affect industrialized economies minimally.” Equating “historical patterns” with mundane examples, such as dike construction and warmer temperatures at night, to the more alarming, like large population migrations and societies seeking “higher ground,” API remained steadfast that “we have no need to worry if the global climate becomes somewhat warmer over a 100-year period.”

When the authors acknowledged the greenhouse effect, its environmental and societal impacts were minimized despite the organization’s earlier statements and findings to the contrary (1968, 1980, and 1982). For instance, “were atmospheric concentrations of carbon dioxide to double,” they began, “‘we might expect a warming of .5 to 1.5 degrees Celsius…present[ing] few if any problems.” These “modest changes,” they continued, “could have both negative and positive impacts…offset by natural adaptation.” Calling for “additional scrutiny,” the authors stated that “no conclusive–or even strongly suggestive–scientific evidence exists that human activities are significantly affecting sea levels, rainfall, surface temperatures or the intensity and frequency of storms.”

Deflecting the relationship between oil combustion and climate change, API cited defunct arguments related to carbon emission “accounting problems,” atmospheric water vapor, and global temperature trends. In the case of agriculture, API targeted the “dumb-farmer scenario,” supposing “if farmers are smart enough to change their crop plans, climate change could have a positive impact on U.S. agriculture–even excluding the likely benefits of carbon dioxide fertilization of crops.” The authors also down-played the impacts of oil spills, forwarded conflicting statements about U.S. reliance on oil imports, and maligned the same environmental statutes they praised for “most of America’s documented environmental progress.”

“Reinventing Energy” highlighted inventions of the past, not ideas for the future, to argue for the legitimacy of “[o]ur current reliance on oil.” To API, issues addressing climate change, pollution, social cost, and energy security were informed by “misperceptions,” or “hype and hyperbole.” Paid to delay, API preferred regulatory inaction for 10 to 20 years over any change that would “undermin[e] rather than heighten…human health and safety.” As “[t]he future is uncertain,” API favored the markets for social and technological progress, not the government. “By its very nature,” the authors reasoned, “an economy that is evolving…cannot be planned, and the entire rationale for centralized decision-making collapses.” With the utmost faith in free markets, API concluded with a dramatic ode to uncertainty: “The element of uncertainty is anathema to some. Yet, the essence of liberty is taking risks and embracing uncertainties.”