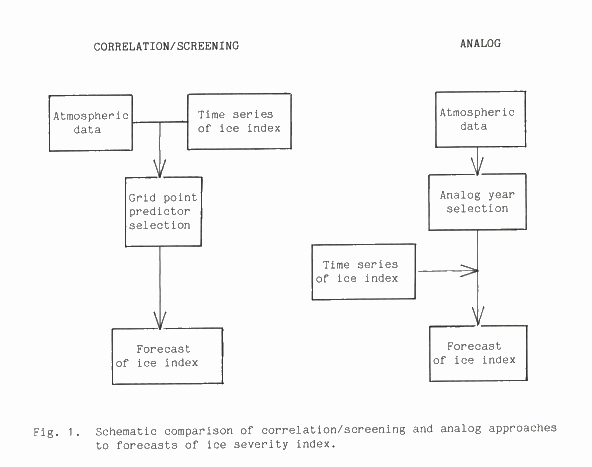 This 1988 research proposal and purchase order from Shell Western outlines Shell’s work in using sea level and sea temperature to determine the longevity of their operations in Alaska. The proposal, “An Analog System for Prediction of Sea Ice Severity,” was sent by E.G. Ward, then Manager of Shell’s Offshore Engineering Research Department, to J. J. Kramerer, then Director of Grants and Contracts Administration for the University of Illinois. The proposal called for the “design, formulation, and testing” of the system.

This proposal demonstrates Shell’s interest in weather forecasting and climate modeling, particularly about predicting the changing season lengths in areas for potential drilling. Hoping for better forecasting of “seasonal ice severity,” the analog method was an emerging technique that showed promise to the company. According to the proposal, the analog system was more capable of “long-range forecasts of weather and ice,” easily transferable when analyzing other “high-latitude” environments, and better suited to identify “[e]xtreme years” than a correlation or screening model. To help predict potential areas for future drilling, the study focused particularly on “the prediction of summer season lengths in both the Beaufort and Chukchi seas.”

CC’ed on the cover letter is John Walsh, who had been working at the University of Illinois as a Professor of Meteorology. This document shows that Walsh was contracted by Shell to work as “Principal Investigator” for the project. Walsh had already established himself by the time of this contract as an authority on the relationship between sea ice and climatic change; in 1982 he published a paper titled “The Role of Sea Ice in Climatic Variability: Theories and Evidence.” Walsh addressed “the climatic consequences of a CO2-induced warming” in his 1982 paper, stating that “a drastic change in sea-ice coverage […] could have longer-term effects on the large-scale energy budgets of the ocean.”

As Principal Investigator, Walsh agreed to a set of provisions, including provisions regarding “secrecy and inventions.” This document shows revisions to the “General Conditions” of the contract, particularly regarding conditions of indemnity; Walsh and Wm. D. Morgan (Associate Director of Grant and Contract Administration) crossed out sections that would have obligated Walsh to “indemnify and defend Buyer [Shell] against all claims, suits, liability and expense on account of alleged infringement of any patent, copyright or trademark.” Walsh and Morgan also objected to conditions that would have protected Shell in the case of “any loss, damage, claim, suit, liability, judgment and expense […] arising out of injury, disease or death of persons or damage to or loss of any property […] or the environment resulting from or in connection with performance or nonperformance of work under this Order.”

The agreed compensation for the project was $26,235.00, which covered the costs of computer equipment and postage, as well as a one month salary for Walsh and a four month salary for an assistant programmer.

Shell proceeded to develop Alaskan reserves extensively from the commissioning of this study until the mid-2000’s.

One thought on “1988 Shell Western Research Proposal and Contract”