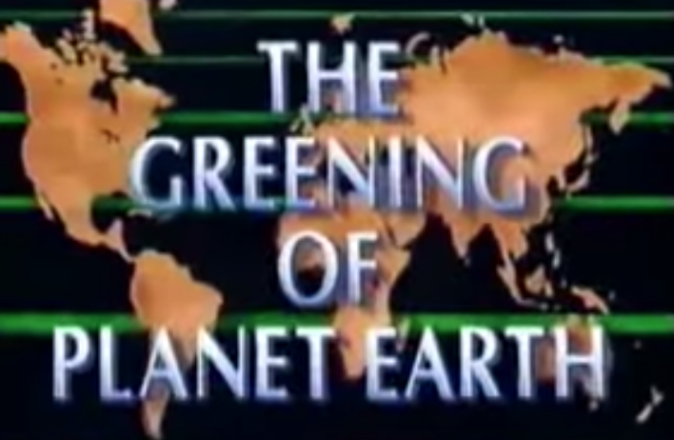 The 1992 video, “The Greening of Planet Earth,” was produced by the Institute of Biospheric Research (IBR) with funding from the Western Fuels Association (WFA). IBR President and climate change denier Sherwood Idso was heavily featured in the film.

The production claimed that increased levels of CO2 would cause a “greening of planet earth,” a positive side effect of industrialization from fossil fuels. Idso justified this claim by pointing to the increased growth rate of plants in greenhouses with elevated levels of CO2. Outside of controlled greenhouse conditions, the film fails to recognize global consequences of increased CO2 levels such as drought, extreme weather, and sea level rise. These conditions would not only effect plant life, but humanity as well.

None of the speakers featured in the film were climate scientists. The majority were botanists (someone who studies plant biology) or agronomists (someone who studies the science and technology of producing plants for food). The only commentator with a background in atmospheric sciences was Gerd-Rainer Weber, who also happened to work for the German National Coal Association. Richard Lindzen, a well known climate denier with a history of funding from ExxonMobil, was also featured. Lindzen’s academic focus was physics and mathematics.

In 1998, the same year WFA launched The Greening Earth Society (GES), the sequel to this production, “The Greening of Planet Earth Continues,” was released. As a package of materials, the WFA bundled both video productions along with a GES report titled, “The CO2 Issue,” and an advertisement for the GES. These GES promotional materials were reportedly distributed to every congressional office on the hill in 1998.

WFA’s funding of the 1992 film was also featured in a 1994 news segment on ABC’s Nightline titled “Is Science for Sale?”

The Greening of Planet Earth:

Narrator: “The carbon dioxide that was in the atmosphere is now being returned to it by the burning of fossil fuels, a natural by-product of mans industrial evolution. And, as more and more scientists are confirming, our world is deficient in carbon dioxide and a doubling of atmospheric CO2 is very beneficial.” (Annotation)

Sherwood Idso: “In very general terms, you should see a real greening of the desert. You should see grasses and small shrubs moving out onto areas where they could not live, survive, and reproduce before. Then there should also be a tendency for bushes and shrubs to grow where only grasses have grown in the past. And of course, forests should greatly expand their ranges.” (Annotation)

Leon H. Allen Jr.: “The increase in atmospheric CO2 is a benefit that will occur around the globe, regardless of where you’re located. There’ll always be some benefit for somebody, for everyone perhaps.” (Annotation)

Herman S. Mayeux Jr.: “We know from historical records and from personal observations that crop productivity has increased dramatically, especially since World War II… So it makes sense that the 30 percent increase in CO2 that we’ve experienced since pre-industrial time should have increased crop growth.” (Annotation)

Narrator: “As we have seen, enriched levels of CO2 in the air greatly enhance growth and water-use efficiency in almost all the world’s vegetation. Crop plants will continue to grow more productively, contributing ever-greater supplies of food. Forests will extend their ranges, grasses will grow where none grow now, and great tracts of barren land will be reclaimed. In fact, it is not inconceivable that the vitality of our entire biosphere could rise by a full order of magnitude over the next few centuries to a new greening of planet earth.” (Annotation)